Succession of dark-grey or black, silty mudstones containing a variable number of coal seams (up to 2 m thick), and grey or buff, very fine- to fine-grained, fairly- to poorly-sorted, argillaceous or silty sandstone beds (up to 5 m thick).
The wire-line log patterns of the formation tend to be serrate (ratty), with gentle bell and funnel shapes, reflecting the stacking of fining- and coarsening-upward cycles and the continuous alternation of thin-bedded lithologies.
The formation is characterised by stacking of more or less symmetrical fining- and coarsening-upward sequences with average thickness of 50 m. Gradual upward shift from coarsening-upward- to fining-upward-dominated cycles can be observed, in four discrete stages.
The Ruurlo Formation can be discriminated from the Klaverbank Formation and the formations of the Dinkel Subgroup by the lack of thick, massive sandstone intercalations. 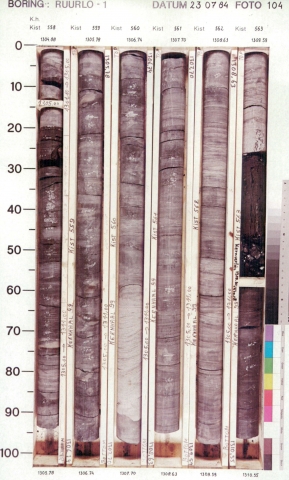 Poorly-drained delta and fluvial-plain system, building out repeatedly into, and gradually filling up a lake basin, with fluctuation lake levels. Marine incursions (mainly brackish) are scarce.

Marked by the abrupt transition into the coal-dominated claystones of the Maurits Formation.