Predominantly reddish-brown, but also greenish-grey or variegated, silty to very fine-grained sandy mudstones. Sands are light grey, white, pink, or red, subangular to rounded, fairly- to well-sorted, fine- to medium-grained, with intercalations of coarse-grained, pebbly sand and conglomerate. Mudstone intercalations are between 10 and 100 m thick (average around 50 m). Carbonaceous particles are common in some intervals, but coal seams are practically absent. 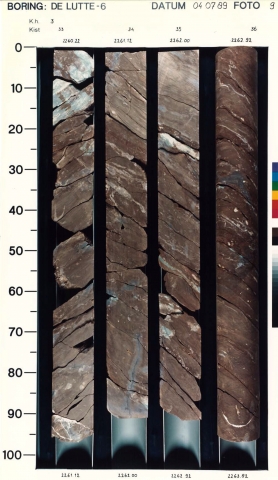 Truncated by an unconformity, which also marks the top of the Limburg Group. The unit can be succeeded by the Lower Rotliegend, Upper Rotliegend or Zechstein Group.