In step 1 you can visualise the spatial extent of GeoTOP, maps of the geological units and also the real and synthetic borehole logs. 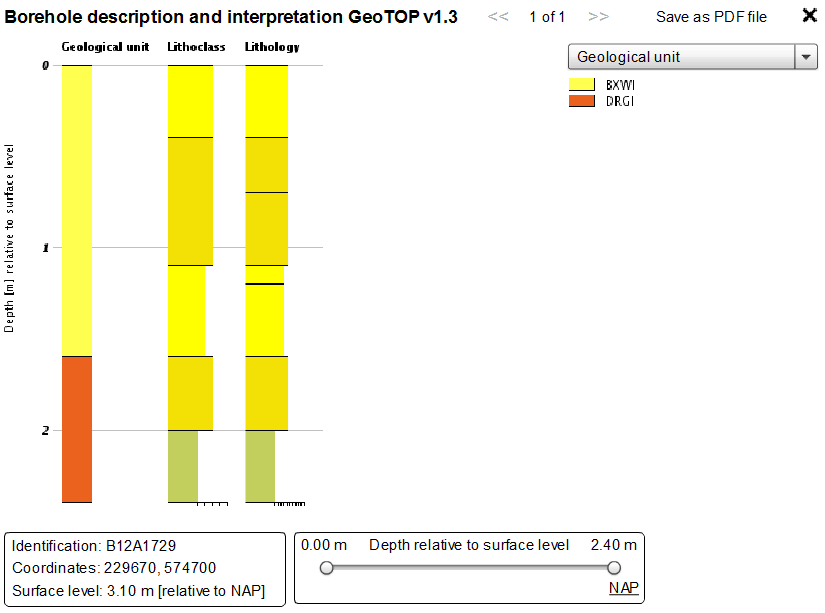 The synthetic borehole through the GeoTOP voxel model shows the vertical sequence of the voxels at a selected location on the map. The voxels measure 100 by 100 by 0.5 m (x, y, z) and therefore correspond to synthetic borehole intervals with a thickness of 50 cm. Per voxel, the following properties are displayed that are representative for the entire voxel:

In GeoTOP the lithological classes are estimated in a stochastic procedure that in addition to estimating the most probable lithological class also estimates the probability of occurrence of each of the discerned lithological classes. The probabilities are a measure of the model uncertainty. For example, if 80% fine sand and 20% clay have been predicted, the uncertainty is relatively low. If, on the other hand, a probability of 35% clay, 40% peat and 25% fine sand has been predicted, then the uncertainty is relatively high. It is important to realise that probabilities are not the same as proportions: a 35% probability of the occurrence of clay means that the entire voxel has a probability of being filled with clay and not that 35% of the voxel contains clay.
The subdivision into model units is also linked with uncertainties but these are not displayed in the synthetic borehole. The ArcGIS files of the GeoTOP layer model do contain information about the uncertainty of the model units.

Viewing the model on your own computer

You can view the requested GeoTOP model data on your own computer in the SubsurfaceViewer and in ArcGIS. ArcGIS applications are available as grid files of the top, base and thickness of the model units in the layer model, and as grid files of horizontal sections through the voxel model (both relative to ground level and to NAP). The content of both datasets is described below.

ArcGIS files of the layer model

The ArcGIS files are compiled in one zip file of c. 300 MB. The unzipped files cover about 10 GB. The zip file contains the following files:

ArcGIS files with depth slices of the voxel model

Horizontal slices (grid files) provide insight into the spatial distribution of the model units and lithological classes at a specific elevation or depth relative to NAP or to surface level. A zip file with horizontal slices comprises the following files:

The file names of the horizontal slices are composed from the following codes:

As the grids of several model areas have been merged, some artificial transitions may be visible along the boundaries of the model areas.

The user can open the files in ArcGIS version 10.0 or higher. Files in a lower version (9.2 or 9.3) can be requested via the contact form. Grid files and shapefiles can be opened in nearly all GIS applications, though sometimes they must first be converted. Examples of alternative GIS packages are Grass (open-source), MapInfo and GeoMedia.