Succession of interbedded 1 to 15 m thick sandstone beds and silty to sandy, carbonaceous mudstones containing occasional coal seams. Sands are predominantly grey or white, fine- to coarse-grained, well- to moderately-sorted and subangular and occur in sheets and channel fills, locally stacked up to 30 m thick, with frequent metre-scale mudstone intercalations.
Mudstone intervals are predominantly greenish-grey or beige, frequently with purple or red-brown horizons in the their upper parts. Coal seams are rare, associated with grey claystone intervals of 5 to 55 m thick. 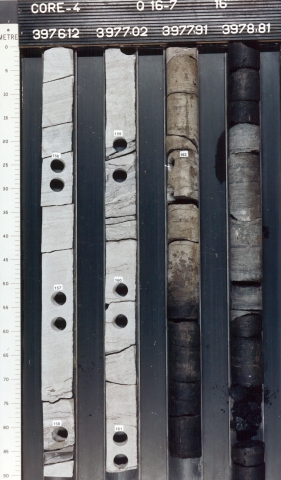 Amalgamated braided fluvial channel fills, with overbank deposits (crevasses, sheet floods).
Poorly- or fairly-drained flood-plains and with local swamps. Sandstone-dominated and mudstone-dominated intervals can be correlated on a local to regional scale, implying a depositional cyclicity.

Contact with the underlying Maurits Formation is marked by the incursion of thick, argillaceous matrix-poor sandstone beds, commonly in combination with a decrease in the frequency of coal seams.

Marked by a transition towards thick, greenish-grey or orange-red mudstones with fewer intercalated sheet sandstones, typical for the overlying Strijen Formation. The boundary is defined at the base of the first mudstone-dominated interval of more than 60 m thick. This diachronous change occurred earlier in the centre of the basin than along its margins.