Succession of dark-grey, brownish-grey or black mudstones, grading into grey or buff siltstones and very fine-grained sandstones. Large number of stacked coarsening-upward cycles of 20 to 300 meter thick, with a coarsening-upward overall trend. The mudstone intervals in the base of some cycles contain open-marine or brackish-water fossils (goniatites, Lingula). Fine- to medium-grained, (sub-)angular, moderately- to well-sorted sandstones are restricted to the tops of some of the cycles. In the Peel area and Gelderland certain sandstone intervals consist of coarse-grained sand and conglomerates. Coal seams typically restricted to the uppermost parts of depositional cycles and can be up to 2 m thick, but generally fall in the dm-range. 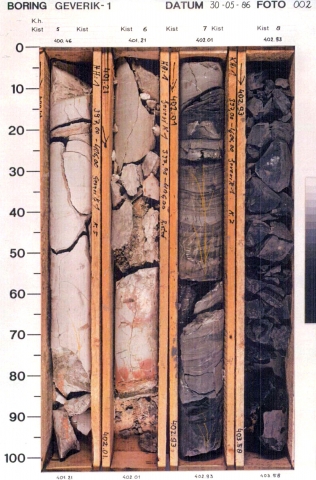 Marine incursions, followed by delta progradation.
Overall regression reduced the deltaic realm to the basin centre. It was succeeded by coastal- and fluvial-plain deposition. Coal seams developed in delta-plain swamps. Clays, silts and very fine-grained sands were deposited in the distal part of the basin, and on the delta plain as overbank sediments.

Placed at the base of the lowermost coal seam and contact with the Geul Subgroup.

Thickness indication
Up to 876 m in LTG-01.
Geographical distribution