The Digital Geological Model (DGM) is a regional-scale layer model of the subsurface of the Netherlands to a depth of 500 metres. The geological layers in this depth interval consist mainly of unconsolidated sediments such as clay, sand and gravel. They have been classified into lithostratigraphic units on the basis of their lithology and other rock properties. The DGM provides insight into the stacking and spatial relationships of these lithostratigraphic units. In this model the base and top of the units are displayed by depth maps. The thickness of the units is derived from the grid maps of the surface and the base.

The DGM covers onshore Netherlands only and therefore the subsurface of the Dutch part of the North Sea is not included.

More detailed information about the development of the model is described in the report "Totstandkomingsrapport Digitaal Geologisch Model (DGM)" (PDF in Dutch - 4.2MB).

The DGM layer model has been constructed from some 26,500 high quality borehole logs selected from the 430,000 borehole logs stored in the DINO database. All these borehole logs are coupled with a lithostratigraphic interpretation. With an eye to application in the hydrogeological model REGIS II, use has also been made of a number of borehole logs from locations relevant for groundwater research: the sites of observation wells and pumping stations for drinking water.

Application and reliability of the model output

The DGM is the framework for the REGIS II subsurface model. Uncertainty maps provide insight into the accuracy of the modelled surfaces, but when using these maps you should bear in mind that DGM is a regional model and that to construct a subsurface model at a local scale you will need additional data from boreholes. The GeoTOP 3D model that is based on a higher density of borehole data displays a more detailed view of the upper 30-50 metres of the subsurface.

More details about the quality of the model can be found in the documents "Kwaliteitstoetsingsdocumenten Digitaal Geologisch Model (DGM)" (ZIP in Dutch - 1.4MB).

DGM version 2.2 (2014) is available in the Subsurface models module. Earlier versions of the DGM can be requested via the contact form. 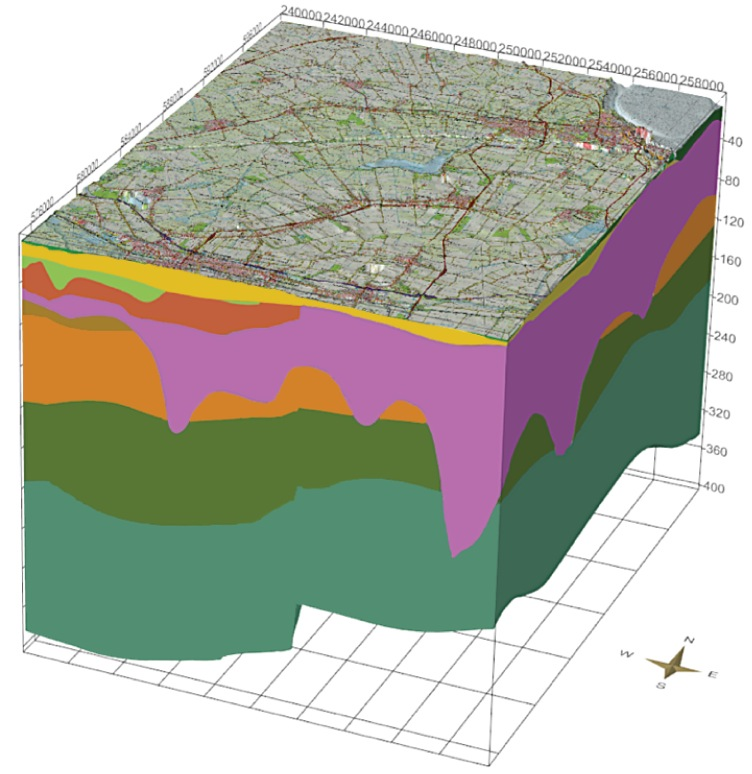