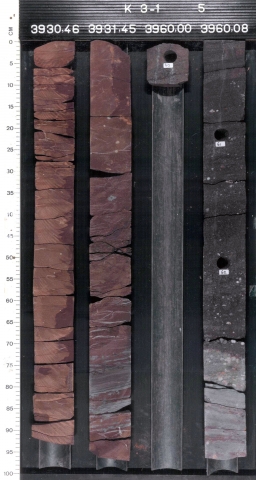 Placed at the base of the lowermost massive sandstone interval, overlying light-grey mudstones with frequent coal seams of the Maurits Formation.

Conformably by the Step Graben Formation, drawn above the uppermost massive sandstone which is succeeded by a mudstone interval of more than 60 m thick. In most wells the top of the formation is formed by the unconformable contact with the Upper Rotliegend Group. The precise boundary can be difficult to pick. Generally, a higher degree of lithification can be observed in the Carboniferous section. Moreover, Pennsylvanian (Silesian) sandstones tend to be more micaceous. In the northeastern offshore, the Hospital Ground Formation grades into grey, fine-grained, carbonaceous deposits, which belong to the upper part of the Maurits Formation.