Succession of dark-grey to black mudstones with a few intercalations of grey and buff, (sub-) angular, moderately- to well-sorted, very fine- to medium-grained sandstone. Coal seams are absent, but disperse carbonaceous matter is locally abundant. The interval consists of a number of stacked coarsening-upward sequences (with funnel-shaped GR-log patterns), between 50 and 300 metres thick. Shaly mudstones, some containing marine fossils, dominate the basal and middle parts of each sequence. In the area south of the Mid-North Sea High some carbonate beds can be intercalated e.g. well A14-01. 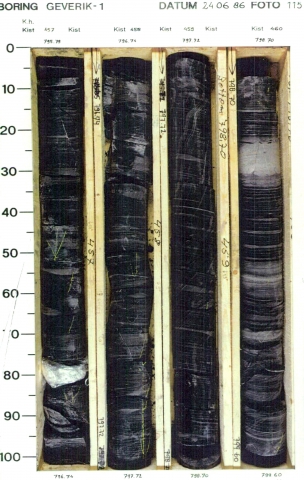 Along the northern margin of the London-Brabant Massif, the Geverik Member (consisting of basal bituminous shale) rests on the carbonates of the Carboniferous Limestone Group. In well Geverik-1 this transition is gradual and apparently conformable, but elsewhere this contact can be unconformable, locally lacking the basal shale (well S02-02). Well A14-01 shows the Mid-North Sea High succession, where the Yoredale Formation grades upwards into the Epen Formation. The boundary has been placed at the top of the uppermost carbonate-dominated sequence.

With the Baarlo Formation placed at the base of the first prominent coal seam. In the northwestern Netherlands offshore, the formation is overlain by the Millstone Grit Formation. The boundary has been placed at the base of the lowermost thick sandstone bed of the sandstone-dominated Millstone Grit succession. It is a diachronous boundary, which becomes younger from north to south. Therefore these formations are also partial lateral equivalents.